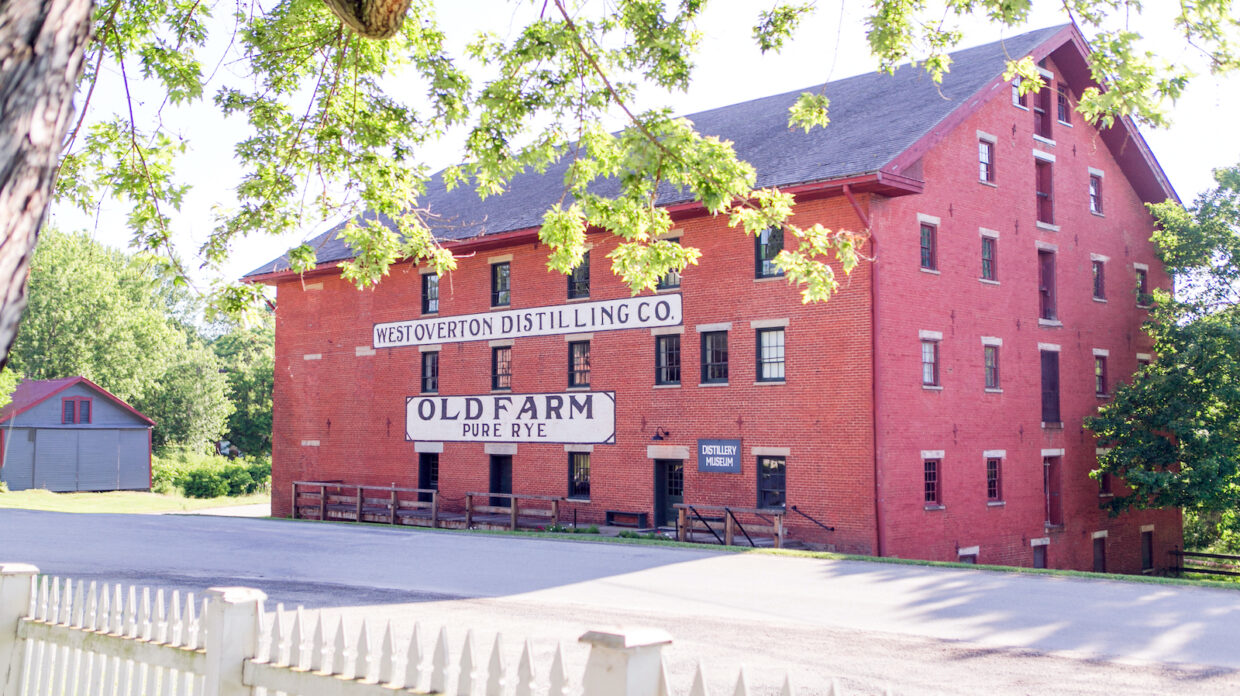 One of the earliest distilleries used by Abraham Overholt to make rye whiskey still stands at West Overton Museums, and is getting support from the parent company of the modern Old Overholt whiskey brand, Beam Suntory.

Many American whiskeys tout their history and authenticity, but few can lay claim to their actual birthplace. Old Overholt can. First made in western Pennsylvania in the early 1800s by Abraham Overholt, one of the rye whiskey’s earliest distilleries still stands at West Overton Museums in Scottsdale, a living history site that traces the area’s evolution from agrarian to industrial, with a particular emphasis on the founding Overholt family. Now, Old Overholt parent company Beam Suntory is partnering with West Overton to ensure that the whiskey’s role in that story continues to be highlighted and supported.

“It always felt like a no-brainer to us,” says Jon Marks, brand director for small batch at Beam Suntory, explaining that Beam Suntory feels a duty to help maintain such an important piece of Old Overholt’s history. “We are stewards of this brand. We own this brand today, and it’s our responsibility to do right by it.”

Jessica Kadie-Barclay, CEO of West Overton Museums, says that Beam Suntory’s partnership is a huge asset to the organization. “They share that same passion for preserving and sharing the history,” she notes. “It’s not just the whiskey that they’re interested in. They’ve been so fascinated by how the whiskey is one aspect but it dovetails and is connected to all these other different pieces of [West Overton’s] history and American history. It started out with the whiskey, but it moves into a much bigger picture.”

The True Story of Old Overholt

Beam Suntory will provide an unrestricted donation to West Overton, followed by ongoing financial support for specific projects such as renovating the museum, which is housed in Abraham Overholt’s 5,000-square-foot distillery building. Marks will sit on West Overton’s board as a non-voting member, to offer support on behalf of Beam Suntory and provide insight from the perspective of the modern whiskey brand. The two organizations will also collaborate to highlight some of West Overton’s historic Old Overholt materials, which include bottles, advertisements, and other ephemera dating back to the 1800s. “Those are the elements that made us really excited about the potential for storytelling on this site,” Marks says.

Those materials may even inspire development of new products and ideas for Old Overholt. In fact, the recent tweak to Old Overholt’s label came about when Beam Suntory staff saw the portrait of Abraham Overholt hanging in the homestead; his grumpy visage, which had graced bottles over a century ago, was restored to the bottle after years of a more neutral-faced iteration. Similarly, the release of Old Overhold Bottled in Bond, the recent switch to non-chill filtering, and the increased proof for Old Overholt Straight rye (now 43% rather than 40% ABV) were all inspired by the whiskey’s past practices, and upcoming new releases—including a rye at 57% ABV (114 proof) and an 11 year old rye—are also based on historical evidence.

Evolving From Pennsylvania to Kentucky

Born in Pennsylvania and emblematic of the Old Monongahela style of rye, Old Overholt was made there until the late 1980s, when Beam Inc. acquired the brand and moved production to Kentucky. Despite the renewed emphasis on the whiskey’s Pennsylvania roots, Beam Suntory doesn’t intend to do any distilling at West Overton or elsewhere in the state. “The great thing about having Overholt still be around as the longest continuously maintained rye whiskey brand in U.S. history, with an unbroken chain of ownership even through Prohibition, is it allows us to speak about and somewhat own the evolution of whiskey,” says Bradford Lawrence, rye whiskey specialist at Beam Suntory. “We’re very proud of where our whiskey is made today in Clermont, Kentucky and the formula that we use. We have the Old Monongahela history in our DNA and that’s part of our story. Now we also have our Kentucky rye production as part of our DNA.”

Lawrence emphasizes that evolution is part of all whiskeys’ histories, and often serves to highlight their strength. Old Overholt’s move from Pennsylvania to Kentucky ensured the rye would continue to be made during a time when the whiskey style was moribund. “Those decisions, to move to Kentucky and to change the formula, needed to happen, and we don’t fault them by any means,” Lawrence explains. “It actually helped the brand stay alive and not become defunct, because it was resilient; it rolled with the punches and it was able to change and adapt and to stay relevant in the ever-evolving whiskey landscape. We embrace that evolution and as we look forward, we’re going to continue that evolution.”

Placing new emphasis on Old Overholt’s birthplace will bring more attention to the whiskey, but for West Overton, it’s a chance to help people learn about American history from a new perspective. “We look at the whiskey as another way of telling the story—another medium to talk about the Overholt family, their business acumen, the science of distillation, the economics of farming and agriculture,” says Kadie-Barclay. “The story of the Overholts is one of entrepreneurialism, grit, and bootstrapping. They were so successful that we have a brand today with Abraham’s face still on it…We’re looking at the past to inform our future. So often history museums get stuck in one time period and we get the pleasure and challenge of interpreting this large scale. I’m so excited about the things that we’re going to be doing.”