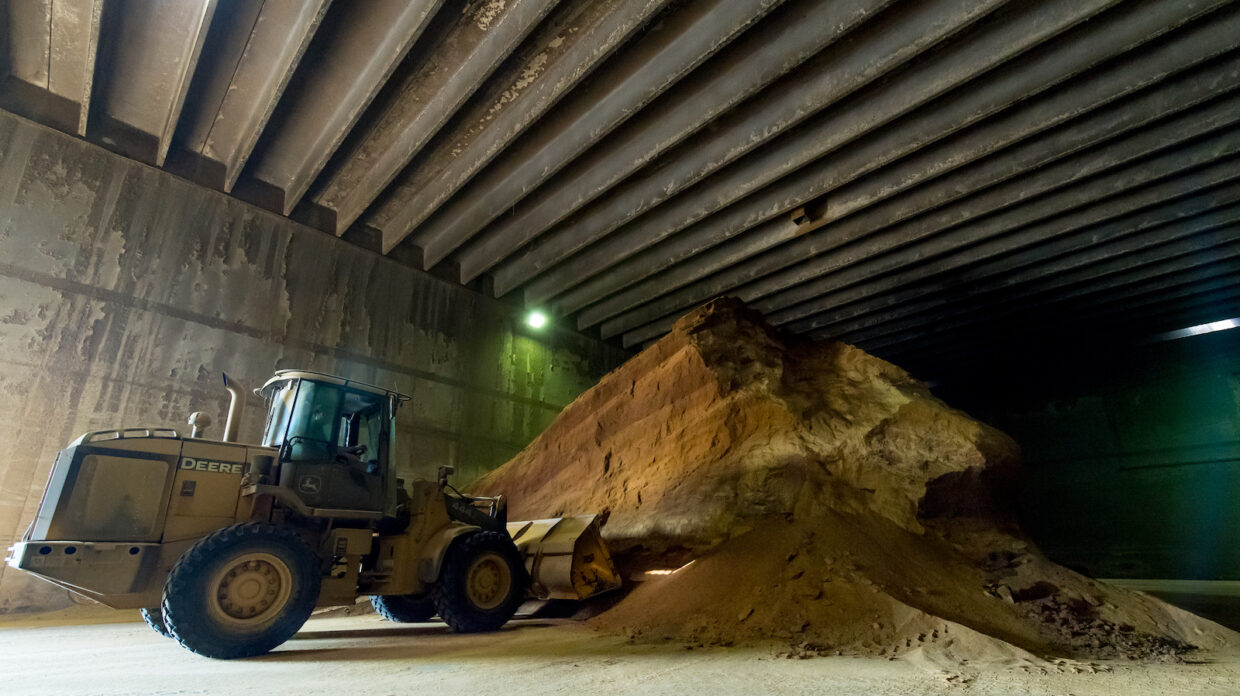 At Hiram Walker & Sons Distillery in Windsor, Ontario, heavy equipment is needed to move the mountains of spent grain. (Photo by Phot-O-Holic Imagery)

When making whisky on an industrial scale, you need a lot of grain. A whole lot.

Approaching Hiram Walker & Sons Distillery, a delicious, bready smell permeates the air: the scent of drying grains. Canada’s largest whisky distillery goes through 100,000 metric tons of corn, wheat, rye, and barley annually—enough to fill around 1,000 hopper railcars. After distillation, Hiram Walker dries the spent grain using steam-tubed dryers and sells it back to local farmers for feeding their livestock. “We can tell if it’s a good day or bad day by the smell,” says Hiram Walker master blender Don Livermore. “If your fermentations aren’t complete, you’ll smell burnt sugar in the air.”

Like other large-scale distilleries, Hiram Walker only has room to keep a few days’ worth of grain on-site at a time—an amount that fits into 19 silos that are so large, at 800 metric tons each, they use sonar to measure the fill level. Each morning, lines of 18-wheelers wait in a patient queue for process engineer Kristy Fregonese to okay their loads of Ontario-grown grain. Along with lab-based quality controls, each load needs to pass a literal sniff test: Fregonese’s nose can detect musty or off smells in grain which would carry through fermentation, distillation, and maturation. “[Don Livermore] would have to deal with it years later if I didn’t do my job,” she says.

A distillery’s mill is one of its most crucial pieces of equipment, used for crushing grain into grist to make it easier to cook. Each type of grain requires its own mill. Single malt distilleries have just one, for malted barley, while grain distilleries use a second, much larger mill for their primary grain, usually corn or wheat. Bourbon distillers typically have three mills, for corn, rye or wheat, and malted barley. The corn mill at Jack Daniel is so huge it churns out 60,000 pounds of crushed No.-1 grade yellow kernels an hour. That’s enough to feed 1.3 million chickens for a week!

Milling is straightforward, but there’s one crucial step that can’t be ignored, or it could break the machine: de-stoning, which separates pieces of rock and other field detritus picked up during harvest from the grain. At Invergordon grain distillery in Scotland, which buys much of its corn from France, the de-stoner yields so much French limestone gravel that distillery manager Mark Lancaster takes it home to landscape his yard.

Unlocking the sugars in starchy grist can only happen through cooking—making enough porridge to feed a small army. Some distilleries, like Midleton in Ireland, have borrowed technology from the brewing industry to cut down on time and create a higher-gravity wort, the sugary solution yeast feeds on, which yields more alcohol during fermentation.

Glenlivet has two mash tuns; designed in a traditional lauter style, they’re wider at the base and feature a valley floor that drops open to dump all solids at once, and a continuous water system that tops up automatically, eliminating the need to add and drain water multiple times. “It’s like a giant washing machine,” says international brand ambassador Ian Logan, noting that one mash cycle takes just three and a half hours, far shorter than the more typical six to eight hours.

Other producers install multiple cookers, like Buffalo Trace, which has four pressure cookers of 20,000 gallons each for its bourbon and rye recipes. Or they simply scale up: The mash tun at the new Macallan Distillery, which opened in 2018, is the largest in the realm of single malt scotch. With a 17 metric ton capacity, it dwarfs the pair at Islay’s Kilchoman (1 metric ton each) and that of Edradour, which holds just over 1 metric ton.

Ready for the Next Step? Let’s Move on to Fermentation