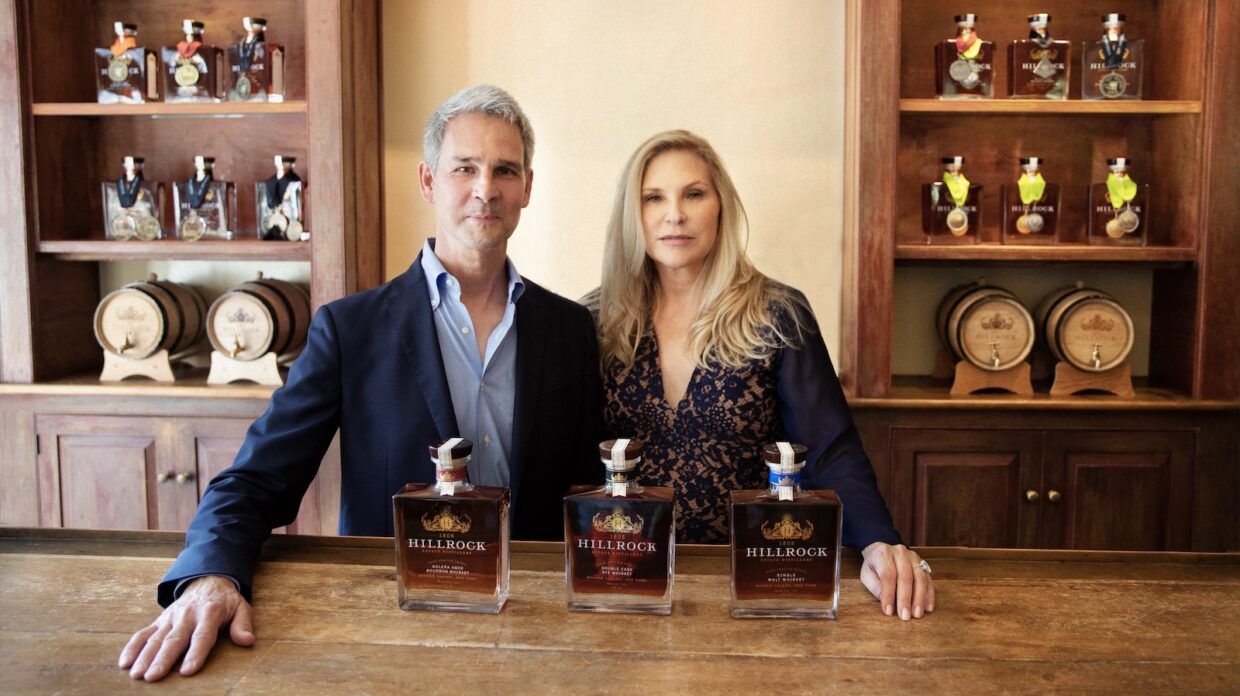 Travel just 100 miles north of New York City—a mere two-hour trip by car—and you’ll reach Hillrock Estate, a distillery that’s integral to the Hudson Valley’s flourishing craft whiskey scene. Here, locality is everything; Hillrock’s whiskeys exemplify grain to glass, with utmost attention given to the soil, grain, water, and yeast present in every bottle. In a first for #TasteWithSpace, on April 9, Whisky Advocate hit the road and journeyed to Hillrock to meet with Jeffrey Baker and Cathy Franklin, the husband-and-wife duo behind the distillery, and talk all-things Hudson Valley whiskey making, as well as how Hillrock got its start.

“When we conceived of a space in the whiskey world that was terroir-driven, no one was thinking of whiskeys that way except Dave [Pickerell],” Baker said. “I called him up and told him we wanted to be a field-to-glass whiskey distillery, where we make whiskeys out of different fields, each of which has a different imprint on it.” The late, legendary, and aforementioned master distiller Dave Pickerell was instrumental to Hillrock’s debut; you’d be remiss to speak of the distillery without mentioning Pickerell. He guided the distillery’s whiskey program from its earliest days, creating its mashbills and quality standards, and, as such, his influence lives on at the distillery today.

Beyond Pickerell’s helping hand, Hillrock’s spirit is wholly cemented in its Hudson Valley DNA. “When we started, I felt whiskey was where wine was in the 1970s; I view us as being the Napa Valley of the East Coast,” said Baker. “There’s a huge food scene, and people are really into their high-quality, farm-based products, and we fit right into that.” Franklin added that the pair is passionate about the region’s agriculture—much of their day-to-day focus is on farming. Altogether, Hillrock has around 850 acres of land, planted to rye, barley, and more.

Franklin and Baker spared no expense when designing Hillrock—which is centered around a sprawling, stately 1806 Georgian-era house—and its emphasis on unique distillation features separates the distillery from its peers. Hillrock’s flagship bourbon is solera-aged—the final product being a mixture of ages, with the average age gradually increasing as the entire system matures—making for a first-of-its-kind American whiskey. “The solera-aging process has been used for centuries, but never for whiskey in the United States,” said Baker. “When we started Hillrock, we thought it had a place in whiskey, and we wanted to be the first.” Hillrock’s solera system is comprised of three tiers, with the whiskeys hand-transferred from the barrels among the tiers, making for an extremely labor-intensive process.

A fan of single malt whiskies, Baker wanted to adhere to tradition for Hillrock’s own estate-grown single malt by floor malting its own barley; Hillrock’s malthouse is the first built at a U.S. distillery since Prohibition. The American single malt is the only whiskey in Hillrock’s lineup that uses a non-local component—Baker and Franklin import peat from Speyside to smoke the barley.

Whisky Advocate associate editor Ted Simmons tasted a variety of Hillrock’s expressions with Franklin and Baker and fielded questions from viewers about how best to pair the whiskies with food. Check out the full interview on IGTV and follow Whisky Advocate on Instagram to keep up with future #TasteWithSpace episodes. The Instagram Live series will be back on April 23 when Westland master distiller Matt Hofmann joins Simmons to discuss the distillery’s latest single malt, Colere.