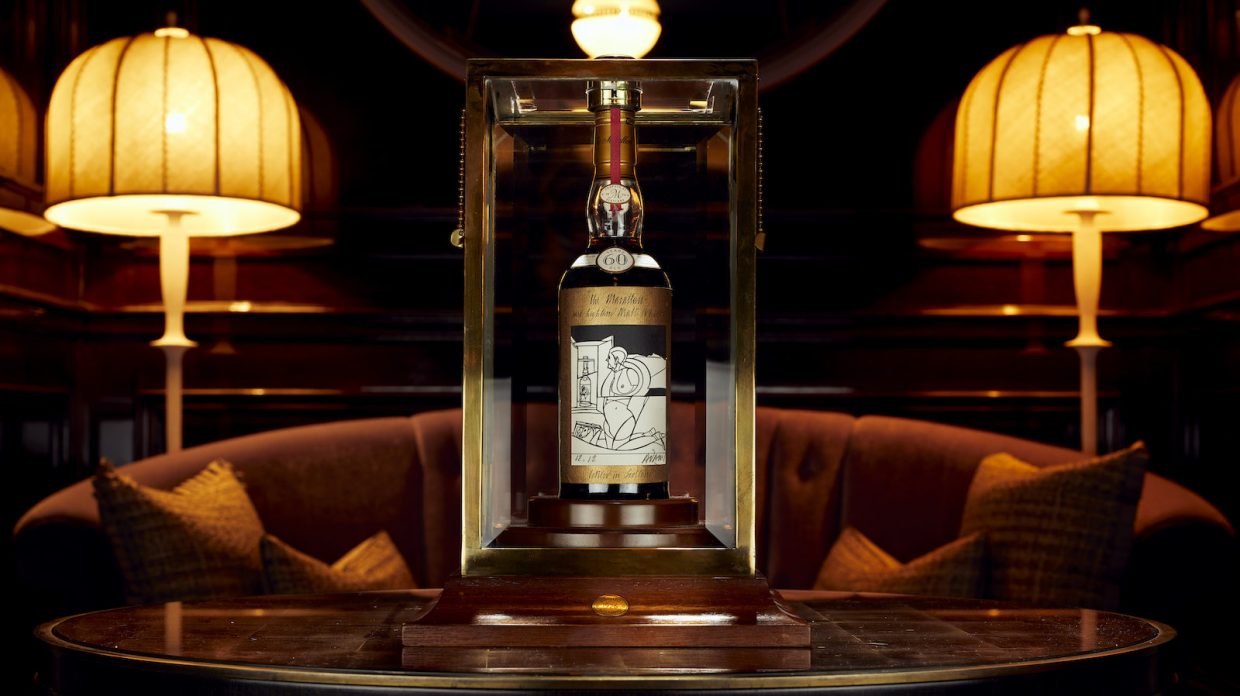 Whisky Auctioneer is the first internet whisky auction house to sell a bottle for more than $1 million—in this case, the 1926 Macallan Valerio Adami 60 year old.

With the click of a mouse, the first million-dollar whisky has been sold at an online whisky auction. The bottle of rare Macallan was the highlight of The Perfect Collection Part One by Whisky Auctioneer, an estate sale of nearly 4,000 bottles, split into two sales, that has the potential to become the greatest whisky auction of all time. A European buyer paid a record $1,180,703, including premiums, for the 1926 Macallan Valerio Adami 60 year old on February 17, 2020, setting a record for Scotland’s most expensive whisky ever auctioned.  It’s also the sixth standard-sized whisky bottle ever to achieve $1 million at auction, and the third-highest auction price ever achieved for a bottle of whisky. Even with the lower premiums charged by online whisky auction houses, this sale unambiguously surpassed the previous record for the Valerio Adami bottle, set in 2018.

Although online whisky auctions are a nascent industry, they’ve grown to become the main method for collectors around the world to buy and sell whisky on the secondary market. Typically, they involve simultaneous sales of thousands of whisky bottles over a 10-day period—quite different from traditional live auctions, where an auctioneer handles the sale of each lot individually over 30 seconds to bidders in the room, on the phone, and online. To be successful in their bids, collectors need to adopt different strategies to best suit each auction format.

What are the Million-Dollar Whiskies?

The first million-dollar whiskies sold in Hong Kong in May 2018. All six came from a single cask of Macallan, distilled in 1926 and matured for 60 years. Although different artistic labels were produced, the 1926 Macallan Fine & Rare 60 year old holds the current world record. To date, five auction houses in Scotland, England, and Hong Kong have auctioned million-dollar whiskies (Bonhams, Hong Kong has done it twice). But there is another bottle out there.

What else happened in The Perfect Collection Part One?

The sale raised $4,277,000 from 1,932 bottles (99.4% of lots sold) and attracted 1,642 bidders from 56 countries. The top prices for each style of whisky are shown below. One in 10 bottles sold was Macallan, which accounted for three in every five dollars spent. Fifty-five bottles sold for more than $10,000 apiece, though there was something for everyone: 126 bottles and 43 miniatures sold for a hammer price of less than $100, with a bottle of Colonel’s Special selling for under $20. Numerous other record prices were set for individual bottlings, including 1928 Macallan Anniversary Malt 50 year old, which sold for $119,700 (£92,000).

The question on everyone’s mind is whether The Perfect Collection could be the greatest whisky auction of all time. An online auction outperforming a traditional live auction house, pitting two incredible single-owner $10 million collections against each other, would be a pivotal moment in whisky auction history. When The Perfect Collection at Whisky Auctioneer was announced, Whisky Advocate calculated that if the whole sale achieved an average hammer price of $2,290 per bottle, then this sale would amass a larger sum than The Ultimate Collection at Sotheby’s. After Part One, we can reveal that Whisky Auctioneer managed an average hammer price of $2,216 per bottle, slightly short of the target. In Part One, only 12 bottles failed to meet the reserve, including Macallan in Lalique 50 year old. These are likely to roll over into The Perfect Collection Part Two, meaning we can anticipate a slightly larger sale of around 1,980 bottles. If Whisky Auctioneer can sell every bottle in Part Two, it must achieve an average hammer price of at least $2,363 per bottle to beat the total sum raised in Sotheby’s Ultimate Whisky Collection. Watch this space!