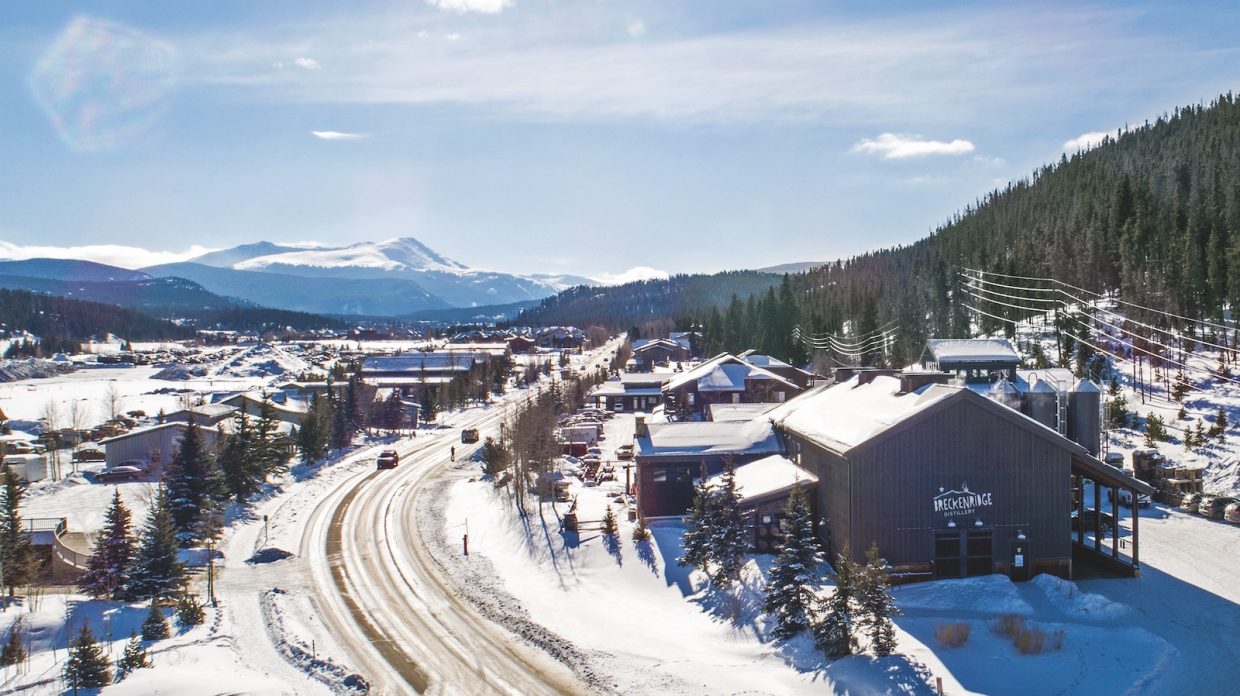 The high altitude at Colorado's Breckenridge Distillery can have extreme effects on whiskey.

Perched high in the mountains or deep underground, they battle blazing heat or frigid cold, and toil in historic buildings or embrace futuristic design. Yet the one thing all these distillers have in common is that nothing will stand in the way of their quest to craft whiskies of distinction. Here’s how 12 distillers from around the world make the most of their extreme situations. All are worthy of a taste, and most definitely a visit!

Whiskey Del Bac (formerly Hamilton Distillers) set out to produce single malt with mesquite-smoked grain, but that’s no easy task in the Sonoran Desert, where summer temperatures can reach 118 degrees and humidity dips below 5 percent.

Incoming water must be cooled before mashing, fermenters require glycol jackets, and managing the malting process amounts to a tug-of-war between chilly mornings and searing afternoons. Throughout the day, weather can be erratic, as winter rains and monsoon storms in summer play havoc with the humidity.

“On any given day, in any given season, we can see up to a 50-degree swing from low to high and back,” says head distiller Nathan Thompson Avelino.

They use slightly thicker than standard barrel staves to help curtail evaporation, but the angels still take as much as 27% of the liquid from each 30-gallon barrel over just one or two years of maturation. Still, letting the climate have its way isn’t all bad. “All those good, rich components, they’re just getting concentrated,” Avelino says. 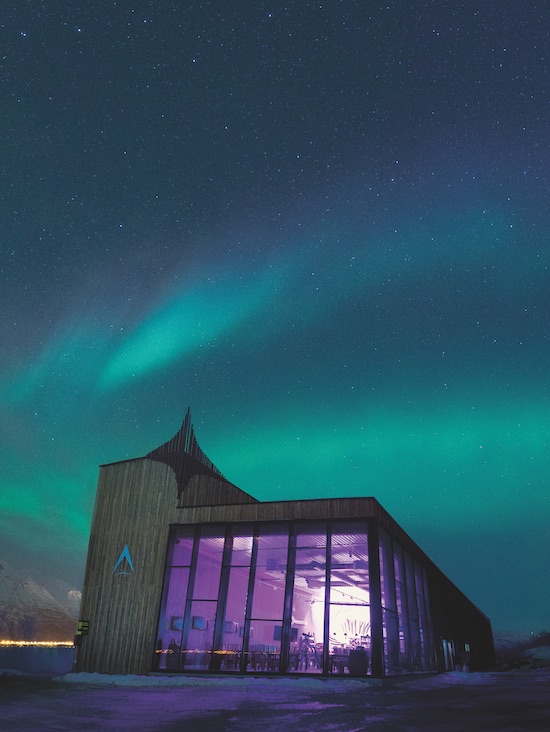 Take in stunning views at Norway’s Aurora Spirit, the northernmost whisky distillery in the world.

Housed in a coastal fort that was first used by Germans in World War II and then by NATO, Aurora Spirit Distillery is the world’s northernmost distillery. The military facility was appealing because road access and heating, lighting, electrical, and ventilation systems were already in place. Plus, the Lyngen Alps draw tourists and the glacial runoff yields abundant mineral-rich water.

Aurora Spirit ages its Bivrost whisky in an underground bunker 30 feet from the sea, which mitigates the bitter Arctic cold. The distillery will offer both peated and unpeated malts made using a variety of cask sizes, woods, and finishes beginning in the spring of 2020. The first will be reminiscent of a fruity Highland malt with a bit of Lowland floral aroma, without attempting to copy either, says co-founder and CEO Tor Petter Christensen.

“We will let the Nordic whisky decide its own particular flavor style,” he says.

His won’t be the first single malt produced above the Arctic Circle, though. That honor goes to Myken Destilleri, which was established on an island off the Norwegian mainland in 2013 and released its first whisky in the fall of 2017.

You can almost set your watch by the multiple dynamite blasts that shake S.D. Strong Distilling every day around 5 p.m. They emanate from an Argentine limestone mine not far from the world’s only distillery to operate entirely in a cave—65 feet below the earth’s surface.

“It shakes the cave,” acknowledges Strong who was inspired to name his whiskey Big Boom straight bourbon, joined by its stablemate S.D. Strong straight rye.

The cave presented other hurdles too, like cramming a still under the 15-foot ceiling, a drainage system that has to pump water up, and ventilation limitations that prevent milling grain.

Still, there are perks. The humidity is constant and temperatures hold steady in the mid-70s year-round, simplifying fermentation and making aging surprisingly predictable. “I didn’t know how it would turn out, being in a cave,” Strong says. “It turned out way better than I would have hoped.”

Perched at 9,600 feet in Colorado’s Rocky Mountains, Breckenridge Distillery is the highest in the United States. On the plus side: stunning views and plenty of clean, pure water seeps down the mountain. The disadvantages? The peculiar effects of high altitude on whiskey making.

The cool mountain air holds little moisture; that speeds evaporation and causes losses of 26 to 28 percent in Breckenridge’s maturing barrels, head distiller Hans Stafsholt says. Such a large angel’s share is a costly proposition. The weather is also highly variable, with dramatic temperature swings, fluctuations in barometric pressure and humidity, and sudden storms that can make consistency and operations a challenge.

“One second it’s sunny and beautiful, the next you’re in a thunderstorm,” Stafsholt says. “The weather changes drastically every second.”

Thieves have in recent years stolen whiskey from distilleries, train depots, and retail shops, but they might have trouble swiping it from Southern Grace, a whiskey distillery that operates under secure lockdown in a former prison.

One-time dormitories are home to distillation, fermentation, storage, and aging of its Conviction Small Batch bourbon, straight bourbon, and other spirits. A concert stage was built near the concrete picnic tables, the old guard booth now sells tickets, visitors pose for photos in the chapel, and the history of it all is presented in each tour. 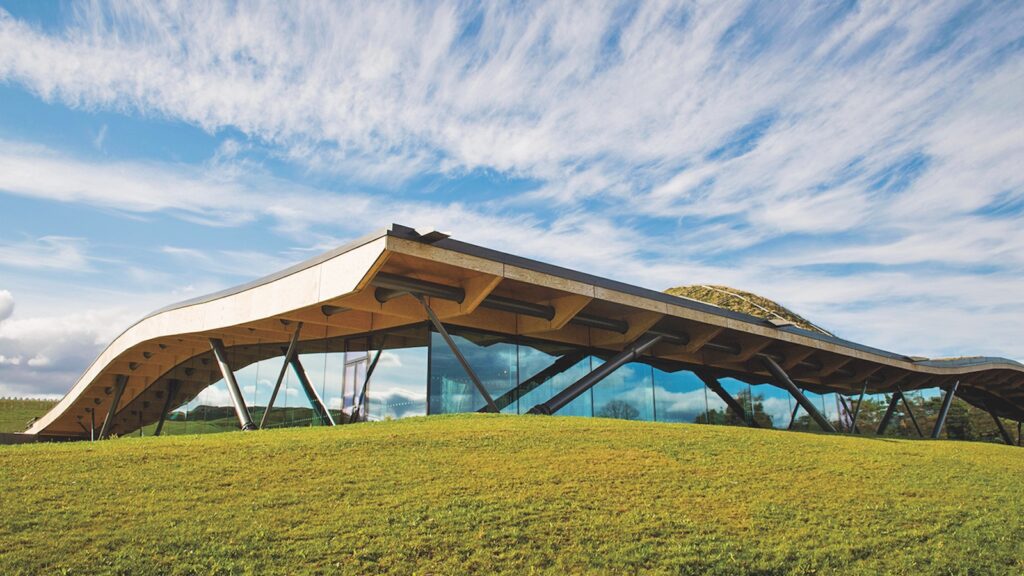 The new Macallan Distillery is meant to mirror the Scottish landscape surrounding it.

Macallan’s new distillery and visitor center pull whisky back into the very Scottish landscape from whence it came. The undulating roof blends into the hillside and evokes ancient earthworks, thanks to its 380,000 individual structural components under a carpet of grass and wildflowers. A light-filled interior gleams with wood, glass, and steel, and the restaurant, bar, and museum contribute to what Macallan’s brand director Samantha Leotta calls an “immersive experience.”

The distilling operation is equally innovative. Its three pods each have a dozen stills and seven washbacks; a single massive mash tun supplies them all. The new stills are exact replicas of the “curiously small” stills Macallan is famous for, and its raw materials, cask program, maturation process, and all other components hew to long-standing tradition.

Not that Macallan left anything to chance. It conducted extensive trials and research to identify the spirit’s fingerprint and then fine-tuned the process for more than a month before production switched to the new distillery in December 2017.

Even though output is likely to increase by one-third to 15 million liters, the distillery has reduced its energy costs and sources 95 percent of its energy from renewable resources, like a nearby biomass plant.

Investment will continue, too. Edrington, Macallan’s owner, says it will spend another £360 million (about $445 million) on the whisky program, including its warehouses and signature sherry-seasoned oak casks, Leotta says. This striking, high-tech distillery, making one of Scotland’s historic single malts, positions Macallan for a bright future.

Few things capture the imagination like whisky from a lost distillery, so Diageo’s 2017 announcement that it would resurrect Brora and Port Ellen generated significant excitement. Both closed in 1983, and both have cult followings for their collectible single malt expressions and blends such as Johnnie Walker Blue Label Ghost and Rare. The 2017 edition included Brora as a component of the blend and retailed for $400; a Port Ellen version was released in 2018 at $350 a bottle.

Diageo is now investing about $42 million to resurrect the distilleries, which will have a combined annual output of 800,000 liters. The spirit of each will retain its character as much as possible, Diageo says—the maritime smokiness of Islay in the case of Port Ellen and a lighter Highland sweetness for Brora.

Distilling is expected to begin in 2020. Rosebank will follow a year later. It won’t be easy, given that thieves stripped the Lowland distillery in Falkirk after it was idled in 1993. Everything save the original chimney, a warehouse, and one or two outbuildings must be rebuilt from scratch using details gleaned from the brand’s archives, says Robbie Hughes, group distillation manager for Rosebank’s owner, Ian Macleod Distillers.

Rosebank will again have three tall, slender lantern-shaped stills, worm-tub condensers, and wooden washbacks. The more difficult challenge is recreating the whisky itself. “We will as much as we can replicate the original plans, but we don’t have a big recipe book. That’s the challenge,” says Hughes, who notes that the distillery does own some older whisky stocks that it may bottle and release in the meantime. 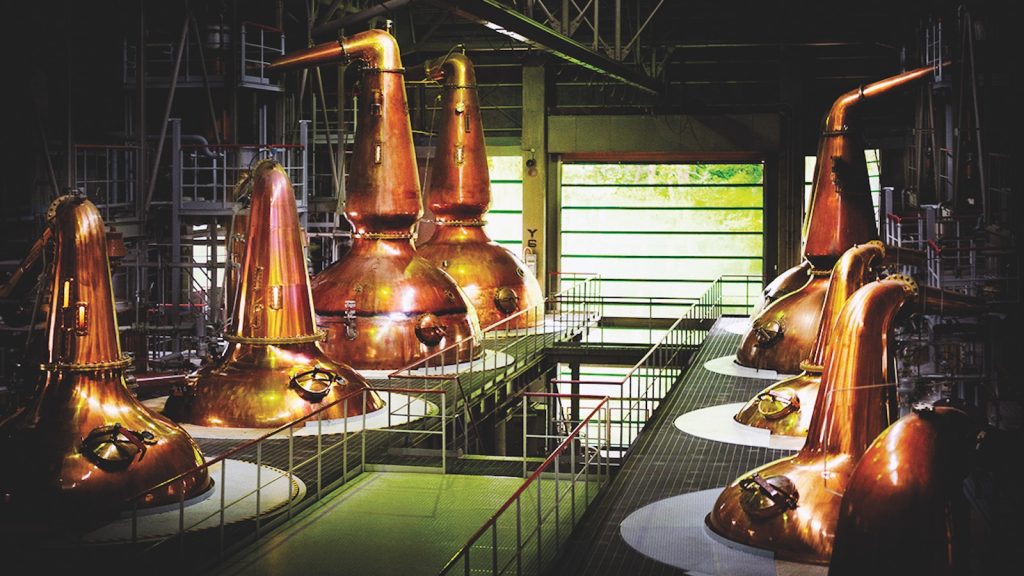 Hakushu is nestled among the serene slopes of Mt. Kaikomagatake in Japan’s Southern Alps, but inside, the stills are active.

Few whisky destinations are as peaceful as Beam Suntory’s Hakushu Distillery, also referred to as Mountain Forest Distillery. It’s nestled in a forest, high on the slopes of Mt. Kaikomagatake in Japan’s Southern Alps, and the entire property is a bird sanctuary where visitors might spot a Narcissus Flycatcher or Siberian Blue Robin while strolling one of the paths.

According to Beam Suntory, all of Hakushu’s whiskies benefit from the exceptionally soft water that filters through layers of granite and into a subterranean source, as well as the seasonal shifts between cold snowy winters and warm summers.

The distillery also practices tsukuriwake—diversity in the making—by using various malts peated to different levels, wooden washbacks, 16 stills of seven different types, and a range of casks to create a myriad of blending options. Set in a natural paradise, Hakushu is like multiple distilleries merged into one.

Distilleries increasingly rely on sustainable energy, but GlenWyvis is the only one in Scotland to generate every kilowatt it uses from its own solar, wind, and hydroelectric sources. Electricity feeds into the regional power grid, then the distillery pulls back what it needs, when it needs it. That’s only the start, though.

A biomass boiler is fueled with wood chips from nearby Black Isle, and its barley is grown by farmers on the peninsula. A herd of Galloway cattle on the farm where the sleekly modern facility is located eats the spent grain. Even GlenWyvis’s more than 3,000 investors are mostly local, making it the country’s first entirely community-owned distillery.

“We are powered by nature and owned by all,” says distillery manager Duncan Tait.

GlenWyvis will release whisky in 2021 for investors. Everyone else can get a taste sometime after that, when it begins selling an unpeated whisky. Tate expects it will show green apple and orange notes from a long fermentation, and grassiness typical of Highland whiskies.

The Height of Success: Glenmorangie Distillery

Of all the tall stills in Scotland, none top those at Glenmorangie Distillery. The necks stretch up 16.9 feet, creating the huge amount of copper contact that contributes to Glenmorangie’s fragrant floral and fruity personality.

Glenmorangie is adding another pair of matching stills as part of an expansion to be completed this year. That will bump its capacity up to 7 million liters a year, giving it room to experiment with high-roast chocolate malts, barley types, and other variables while still meeting demand for current expressions.