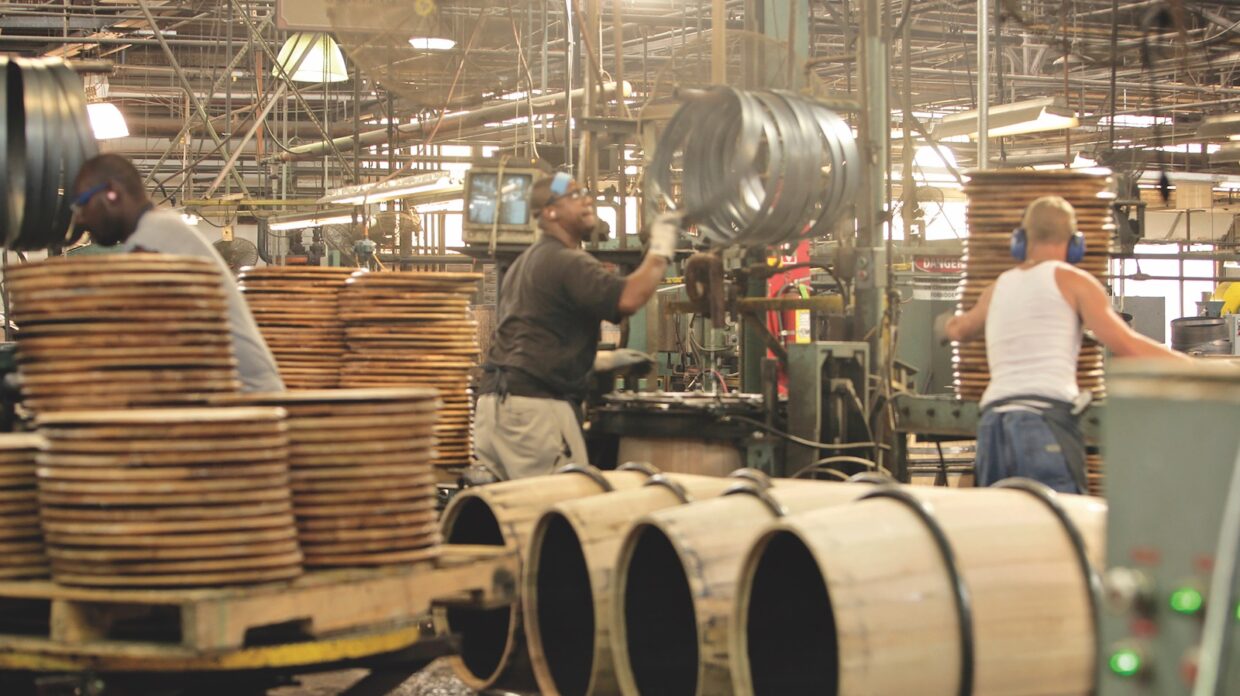 Brown-Forman, Jack Daniel’s parent company, has not one, but two cooperages to supply its needs, making a combined 2,500 barrels a day.

You can’t have whisky without barrels, and large-scale distilleries go through a lot of them. Heaven Hill receives seven truckloads of new barrels a day, totaling about 1,400—just enough to meet its requirements. Jack Daniel’s parent company Brown-Forman owns two cooperages, in Kentucky and Alabama, that churn out around 2,500 barrels a day combined to supply its needs.

At scotch distilleries, casks can be reused multiple times, and many large plants maintain an on-site cooperage to repair and refresh them. Scotland’s Loch Lomond Distillery, which makes both grain and single malt whisky, employs seven full-time and two apprentice coopers who process hundreds of casks a week, replacing staves, re-riveting hoops, putting on new heads, even shaving and recharring the interiors to get more life out of them.

Barrels were originally designed for strength and ease of transport, since they can be handled by a single person. But at large distilleries, human barrel-rollers have been replaced by conveyor belts, moving four or six casks at a time to the gas pump-type nozzles connected by hoses to giant holding tanks; each cask receives precisely the right amount of liquid before being bunged, whisked away on another conveyor belt, and loaded into trucks for transportation to the warehouse. While most bourbon producers keep barrels on their sides on shelves called ricks, Irish, Canadian, and Scottish distilleries typically use pallets to store the casks on end, as they can be moved by forklift four at a time. Pallets also save space and are more stable when stacked high. Hiram Walker uses pallets at its 15 Pike Creek whisky warehouses, which are among the largest in the world, each holding 120,000 casks.

In Kentucky, Scotland, Ireland, and beyond, warehouses by the dozen line hillsides and nestle in valleys, as neat and erect as Monopoly hotels. Inside each one, tens of thousands of casks rest in gridded rows and columns, and each is carefully inventoried and tracked. Heaven Hill uses barcodes, RFID tags, and a database that can home in on the exact location of every single one of its 1.7 million barrels. But even at this scale, master distiller Conor O’Driscoll notes that seasoned staff rely on experience to identify spots where certain recipes mature particularly well. “There’s a lot of human interaction with [the computer program],” he says. “The institutional knowledge that Larceny likes this range, whereas these warehouses produce this type of whiskey—that’s a layer that we put on top of the software.”

Ready for the Next Step? Bottling, Blending, and the Aftermath