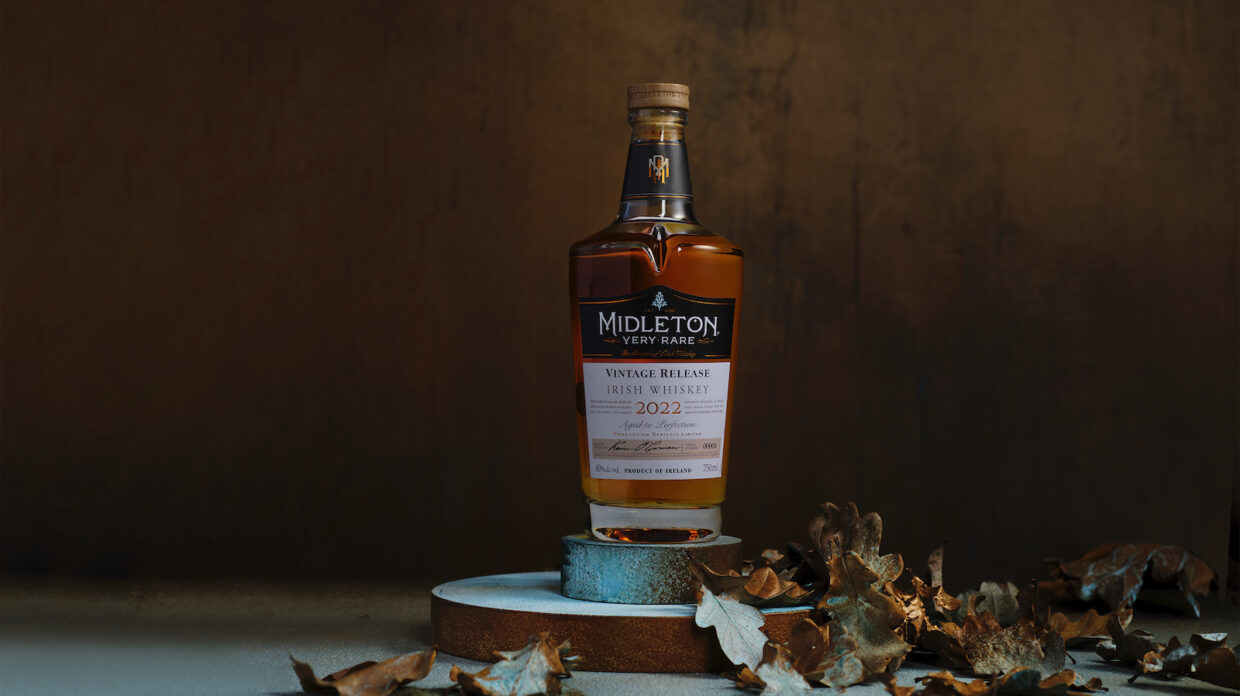 The annual release of Midleton Very Rare, the ultra-aged blend of single grain and single pot still whiskeys from Irish Distillers, is out a bit earlier than usual this year.

St. Patrick’s Day is rapidly approaching, which means we’re getting new Irish whiskey releases. Leading this week is the 2022 edition of Midleton Very Rare, the ultra-aged annual release crafted by Midleton master distiller Kevin O’Gorman, who took on that role from Brian Nation in 2021. Other Irish releases this week include a commemorative bottling of The Sexton to honor the final season of “The Walking Dead,” and a Glendalough single malt finished in mizunara barrels. Outside the Irish whiskey space, the notables include a single barrel expression from Evan Williams to celebrate the 67th anniversary of the Kentucky Derby Festival, and a collaboration between Royal Salute and designer Richard Quinn, 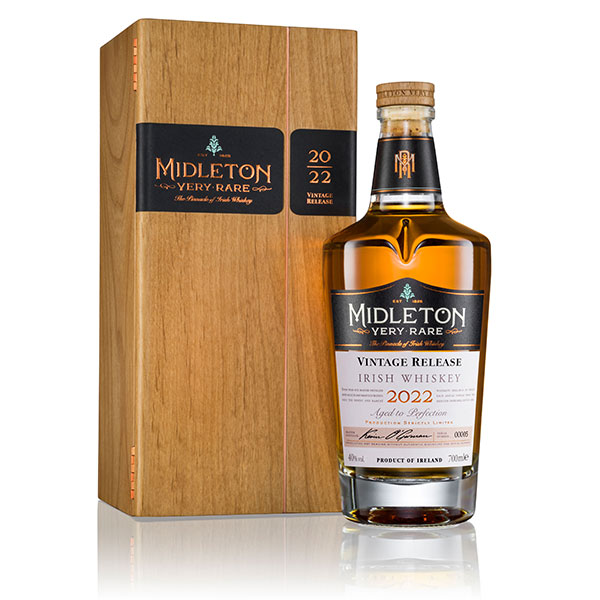 Irish Distillers, producer of Jameson and Redbreast, switched Midleton Very Rare to an earlier spring release to give whiskey lovers more time to celebrate special occasions with the new vintage throughout the year. Only three master distillers—Barry Crockett, Brian Nation, and Kevin O’Gorman—have overseen this annual release over the past four decades; this is O’Gorman’s second bottling. Whiskeys are selected from the highest quality stocks in the inventory, giving each annual vintage its own character within the Midleton Very Rare profile, making this series popular with Irish whiskey collectors. As a result, many of the older vintages have become extremely valuable at auction. Look for a future What’s It Worth article on the series. 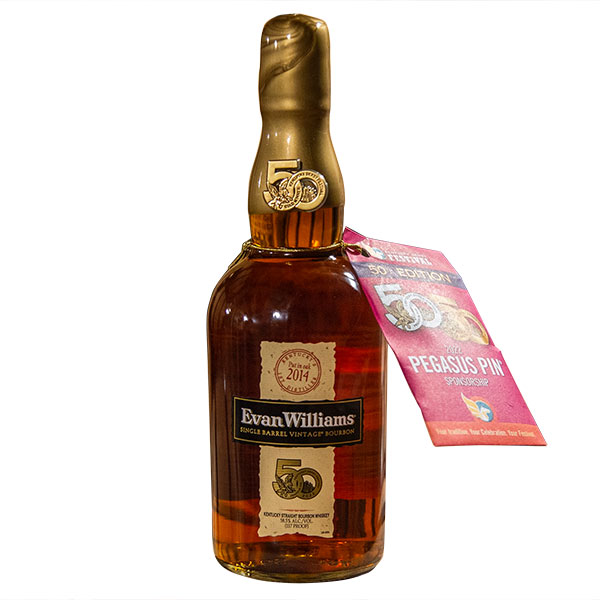 The Evan Williams Bourbon Experience is releasing this special bottle of single barrel bourbon to celebrate the 67th Kentucky Derby Festival and the 50th year of Pegasus Pin, which grants the holder access to 30 different Derby-related events. The whiskey was bottled at 117 proof (the sum of 67 and 50) to commemorate the occasion, and dipped in gold wax. Each bottle features a Pegasus Pin enclosed in an envelope.

We may think of the Kentucky Derby as simply one horse race, but there is actually a full calendar of more than 70 events leading up to the day. This year’s festival runs from March 16th thru May 6th followed by the race on May 7th. Whether you are attending or hosting a Derby party at home, check out our guide.

In addition to its collectible pin, this expression is also special because of its high proof. Evan Williams single barrel is typically bottled at 43.3% ABV. Owner Heaven Hill has impressed us in the past with its barrel proof versions of Elijah Craig and Larceny, so this higher proof Evan Williams should be a treat. 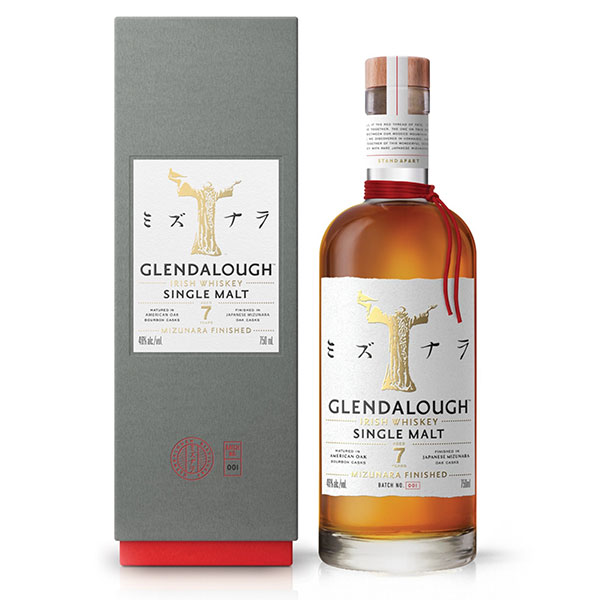 This expression was first aged in heavily charred bourbon barrels and then finished for a year in mizunara oak casks. Glendalough has been a pioneer among Irish whiskey producers in the use of mizunara oak finishing, as it has previously released 17 year old and 13 year old single malts finished in this rare Japanese wood type.

Whiskies aged in mizunara oak, which is grown in the mountain forest of Japan’s northernmost main island of Hokkaido, were an unusual sighting outside the Japanese whisky space until fairly recently. Dewar’s has been perhaps the most high-profile non-Japanese whisky maker to use mizunara, with its Dewar’s Japanese Smooth expression launched last year. But others, including Angel’s Envy, Bainbridge Yama, Heaven’s Door, and Chivas Regal, also have released mizunara-finished expressions. 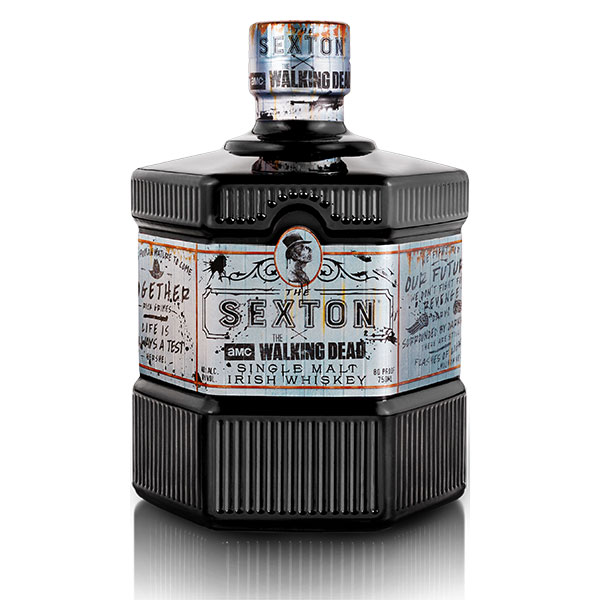 The Sexton is teaming up with AMC’s “The Walking Dead” for this exclusive bottle commemorating the show’s final season. A zombie or “walker” head is in place of the brand’s trademark skeleton logo, with the bottle also featuring quotes from various characters throughout the show’s 11 season run.

In 2019, “The Walking Dead” debuted its own Kentucky bourbon labeled Spirits of the Apocalypse (87 points). As the show comes to a close (though its various spin-offs will continue) it is giving whiskey-minded fans another bottle to seek out.  Back in 2018, we spoke with actor Michael Cudlitz, who played Abraham on the show, about his love of whiskey and cigars. “Game of Thrones” similarly closed its final season with a whisky launch, including a line of single malts and a few custom Johnnie Walker blends. 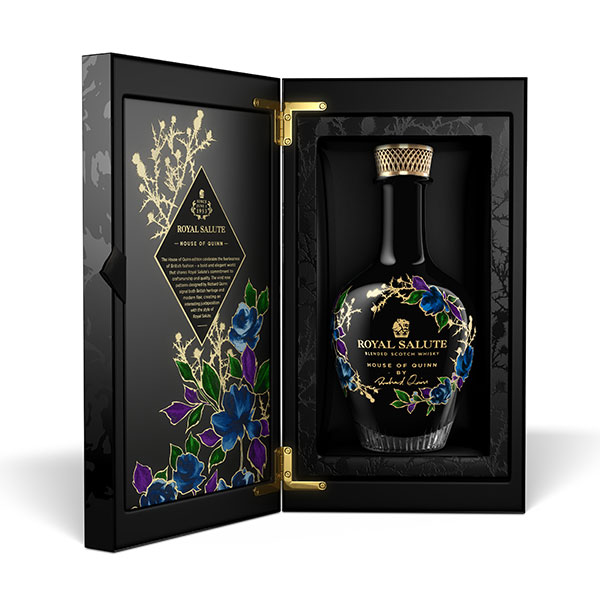 This blended malt is the second release in the Couture Collection, a partnership between Royal Salute and British fashion designer Richard Quinn. The blend was released ahead of London Fashion Week, February 18-22. The blend created by Royal Salute master blender Sandy Hyslop includes whiskies from casks laid down in 1990, Quinn’s birth year, and is presented in individually numbered Dartington crystal decanters.

Pernod Ricard, owner of Royal Salute, has a history of high-fashion collaborations, including Alexander McQueen, Vivienne Westwood, Balmain, Christian Lacroix, Patrick Grant, and Bremont, though they have usually reserved these special releases for Chivas Regal. Quinn’s label, founded just over five years ago, specializes in womenswear and printed textiles and is known for bold floral designs, evident on last year’s Royal Salute 21 year old Richard Quinn Edition. The release marks Royal Salute’s second collaboration with BlockBar, where it is offering bottle #1, signed by Quinn, as a non-fungible token (NFT) for the Ethereum equivalent of $15,000. Although this release carries no age statement, Hyslop only selects whiskies aged 21 years or older when blending for Royal Salute. 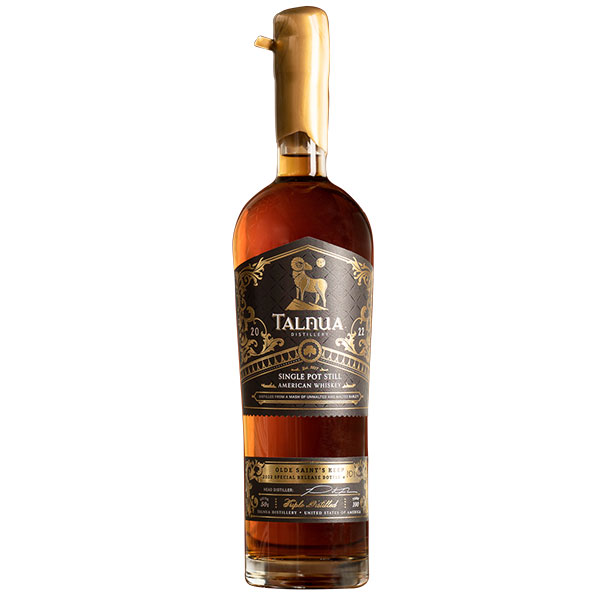 This whiskey was triple distilled from a mash of 50% malted and 50% unmalted barely in the single pot still style. The whiskey was first aged in former bourbon and port casks, then the two were married and finished for 10 months in casks previously used for Pineau des Charentes, a fortified wine made in southwestern France.

Talnua is among a new class of American distillers honoring their Irish heritage by creating whiskeys according to Irish distilling traditions, in this case following the recipe for single pot still whiskey. Each year, Talnua releases an edition of Olde Saint’s Keep to celebrate St. Patrick’s Day, with the 2022 release marking the distillery’s five-year anniversary as well. 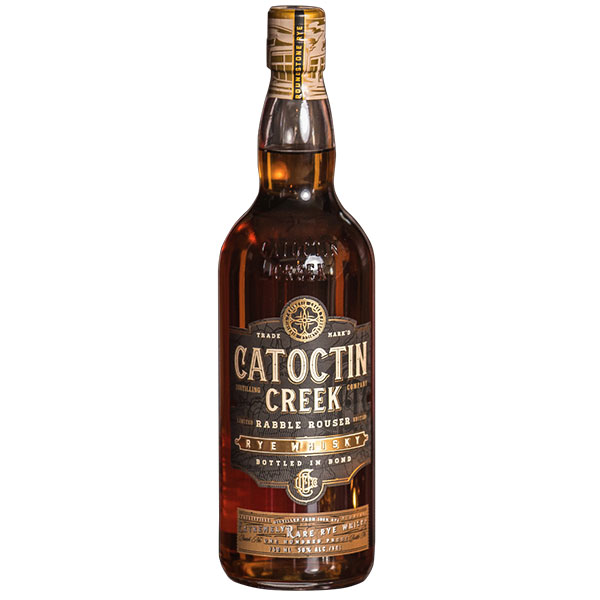 A limited annual release, this bottled in bond whiskey from Catoctin Creek is distilled from 100% rye grain.

When the first Rabble Rouser Bottled in Bond rye debuted two years ago, it quickly became one of Catoctin Creek’s most sought after limited releases. Bottled in bond (BIB) whiskeys have found an ardent fan base, and success with our tasting panel, too—in the past few years BIB expressions from Old Overholt, George Dickel, and Old Fitzgerald have all landed on our Top 20 lists. 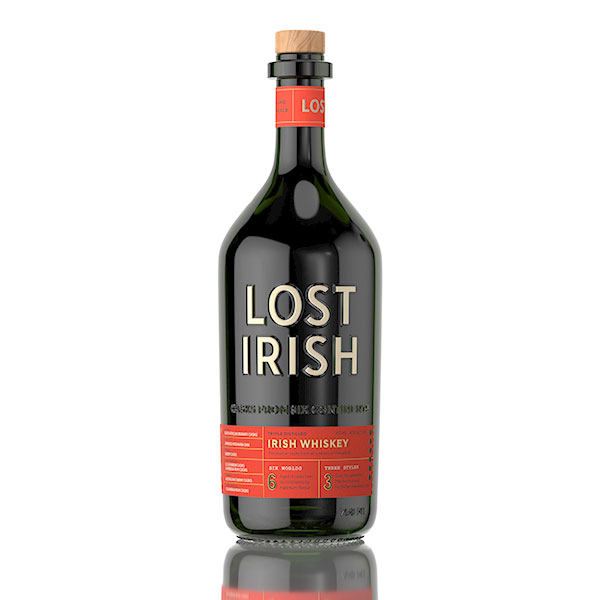 Lost Irish is a triple-distilled blend of grain, malt, and pot still whiskeys that’s aged in casks sourced from six continents (all but Antarctica).

This whiskey lays claim to Irish roots with a global influence, namely from its unusual cask finish. It is finished in casks from South African brandy; Japanese mizunara oak; European sherry; bourbon; Caribbean rum; Australian tawny; and Colombian rum during maturation, in homage to the 70 million Irish people living across the globe. Founded by childhood friends Neil Sands and Tim Herlihy of Termonfeckin, Ireland. Lost Irish is made and bottled in Ireland in partnership with Mexico-based spirits company Casa Lumbre.